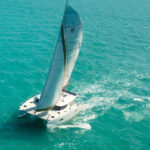 Our Fontaine Pajot Hélia 44 is a 2013 French-made 44-foot catamaran called Gémeaux (rhymes with halo and translates to the zodiac sign Gemini or twins as in twin hulls). 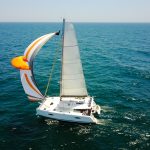 We found Gémeaux on the Caribbean island of St. Martin. She survived a trans-Atlantic voyage to the Caribbean, sold briefly to a second owner, and had been dry-docked for nearly a year when we met her. With the prospect of a potential buyer, she was plunged back into the water and tidied up for an inspection and sea trial late in November 2016. While she showed definite signs of dehydration, her frame was sturdy. Allen deemed her seaworthy and I deemed her a perfect home. We had a boat.

Gémeaux has two primary sails (a main and a jib), as well as two diesel 55hp engines, which charge the four batteries to create the majority of our power. . . hang on, I need to clarify two things. First, recall in our intro that Allen grew up in the sailing world. In addition to being an expert sailor, he’s also an Electrical Engineer, a computer whiz, and a nerd. He can fix anything and knows just about everything, which is terribly annoying unless it’s something you need to know too. So, engines are never just engines on this boat–they are Volvo 55-horsepower diesel 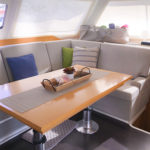 engines that are connected through a sail drive to the propellers. You experienced sailors know exactly the set-up and will ask, “Are those feathering or folding props?” Second point–recall that I know nothing about sailing. In my world, we have two green engines with some black wire thingies that are underneath our pretty teak floor. MY friends will have a perfect picture of what that looks like. They won’t require any additional information and will instead ask whether we have Sunbrella Taupe or the new Alloy Silver upholstery.

We love our wide spectrum of readers, but it does beg the question of how to write this blog. Let’s just say that when Allen writes, he can write in as much technical jargon and detail as his little heart desires. But most of you know that Allen is at the helm, or disassembling the navigation panel, or underneath the boat working on the feathering props, and I’m the one writing. So, bear with me experienced sailors and I promise to feed your insatiable technical appetite as I get sucked into the fascination of how Gémeaux works. By the way, I’m chief of the galley and the only non-acrophobiac who can climb up the mast, lest you think I’m just a princess working on my tan. 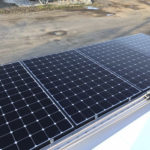 So back to how Gémeaux makes power, because even I find this very interesting. We rely on the engines, solar panels, and a hydrogenerator (think mini outboard) to create 12 volts of DC power. An inverter converts the DC power from the batteries to 240v of AC power that Voilà! allows us to turn on the lights and charge our iPhones. Unlike your home, however, our inverter produces a maximum of 2000 watts of power so we leave the hair dryers behind and drink margaritas on the rocks vs. blended. We added a generator that also produces power and runs our two luxuries–air-conditioning and a washer/dryer unit. Gémeaux is equipped with a water maker that converts salt water into fresh water so the water in the showers and all sinks is fresh and drinkable. This particular feature makes us pretty self-sustainable, which allows us to explore remote areas…something we both really enjoy. 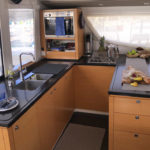 Gémeaux has all the essentials of home–kitchen (galley), bedrooms (staterooms), three bathrooms (heads), an indoor dining/living area (salon), an outdoor dining/living area (cockpit), and my favorite place–a rooftop lounging area. We have everything we need–it’s just a little smaller (our stateroom is the size of your walk-in closet) and we have less (instead of a complete set of knives, we have one–well that was until Courtney Corda visited…now we are equipped like a professional kitchen).

In general, we just have a much simpler life, which gives us more time to explore and wander the planet. 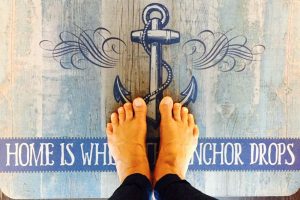